Leo and Judith Ray started their first catfish farm, Fish Breeders, in the Imperial Valley of California in 1968. Then, in 1973, they moved to the Magic Valley of Idaho in search of a new and better way to raise fish. The Magic Valley has the largest volume of high quality spring water in the world. The abundant cold springs and warm, geothermal, artesian water were perfect for fish farming. It was there that they built Fish Breeders of Idaho, Inc.

Using the geothermal water, they first focused on raising catfish in concrete raceways with high density production and temperature control. In 1975, Leo extended this technology to Tilapia; thus (unknowingly at the time) creating the first successful Tilapia farm in the United States. Rainbow trout were added to Fish Breeders of Idaho's production in 1978 and sturgeon was introduced 1988. Even alligators were imported from Florida and raised from 1992 until 2002. Most recently, the company has expanded into tropical aquarium fish and White sturgeon caviar. 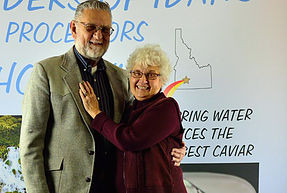